Soy Formula Vs. Goat’s Milk Formula – What Are the Differences?

Being familiar with the various types of formula could help you choose a good formula for your toddler. Today, we are going to compare two common formula types on the market: soy formula and goat’s milk formula. After this article, you will have gained a little more insight into these two options, after which you can make an informed decision about the formula for your toddler.

What Is Soy Formula?

Soy formula is a source of nutrients for children. It is created by mixing soy protein with other ingredients, and could be used as a replacement for regular cow’s milk formula. Like other formulas on the market today, soy formula must meet the same guidelines and directives as other formulas, even though it is not obtained from an animal source.

What Is Goat’s Milk Formula?

We also need to mention that goat formula is a great source of dietary fibres called prebiotic oligosaccharides. These are non-digestible carbohydrates that are not absorbed by the body, but kept in the large intestines to perform various functions.

Considering goat formula is a rich source of nutrients, it is certainly on par with another popular formula on the market today – cow’s milk formula. However, parents must know that goat formula does contain higher natural levels of certain vitamins and minerals; this includes vitamin A, vitamin C, calcium and magnesium. Goat formula also tends to be gentler on the tummy of children.

Why Are Parents So Concerned About Giving Their Toddler Soy Formula?

Over the years, there have been some concerns about the use of soy formula. Soy formula contains specific compounds called isoflavones, these are the substances that are mainly found in beans, soybeans, peanuts and chickpeas. Isoflavones are currently the reason why researchers and medical health professionals are debating the health risks of soy formula.

Before we continue, we must state clearly that there have been no reported cases of children experiencing health problems because of soy formula. However, scientists and researchers have stated that children are more likely to be sensitive to estrogens during their developmental stages; this is related to the isoflavones we mentioned earlier.

Isoflavones found in soy products usually appear in three primary forms. These primary forms are genistein, daidzein and glycitein. These isoflavones are called phytoestrogens, since they are found in plants, but also since they can act like the female hormone oestrogen in the human body.

But what could be the consequences of this oestrogen-like substance inside soy formula? As we stated earlier, there have been no actual reports of children experiencing health problems resulting from the use of soy formula. However, medical researchers are concerned that the use of soy formula could bring on early puberty in females and even alternations in the development of the breast tissue, since similar consequences have been shown in animal studies. Still, the exact effect of soy formula on the health of children is currently unknown and unproven.

Unfortunately, there are more concerns regarding the use of soy formula. These concerns surround two other compounds present in the source product of soy formula – the soybean. These two compounds are Trypsin inhibitors and phytic acid.

Trypsin inhibitors enable soybeans to absorb the nutrients they need to survive, and most of these compounds disappear during the production process of soy formula. However, trace amounts of these compounds remain and this is where the concern lies.

Medical researchers believe that the presence of Trypsin inhibitors could prevent normal growth. Studies on rats have indicated that normal growth was prevented due to the presence of these compounds, hence why scientists believe it could have a negative impact on the brain and nervous system of children drinking soy formula. Still, there have been no reports on children experiencing these developmental issues after using this formula.

Phytic acid, an organic acid that is present in large quantities in soybeans, is also cause for concern. While in the outer portions of soybean seeds, phytic acid is known to block absorption of vital minerals such as calcium, magnesium, iron and zinc. Therefore, a similar effect caused by soy formula could be devastating for the health of children.

Medical researchers believe that the present of phytic acid in soy formula could have lifelong implications for children, more specifically it could reduce the IQ of the child. This claim is related to the absorption of zinc, which is known to be blocked by phytic acid. 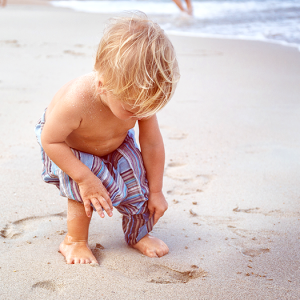 Unlike other claims about soy formula, the phytic acid claim is backed up by scientific proof. A study in 1967 discovered that children using soy formula all had a zinc deficiency. Scientists still believe that this zinc deficiency is directly related to the presence of phytic acid, and believe that the absorption of other important minerals could be hindered as well.

In conclusion, if you are considering soy formula, it is recommended to speak to a health professional first. In most cases, there must be a medical reason for the child to switch to soy formula, considering the unclear implications the use of this formula is surrounded by.

Does Goat’s Milk Formula Cause the Same Concerns?

The same concerns do not apply to goat’s milk formula, since the source product is not soy. Goat’s milk toddler formula is made from fresh goat’s milk and therefore relies on the natural nutrients present in this goat’s milk.